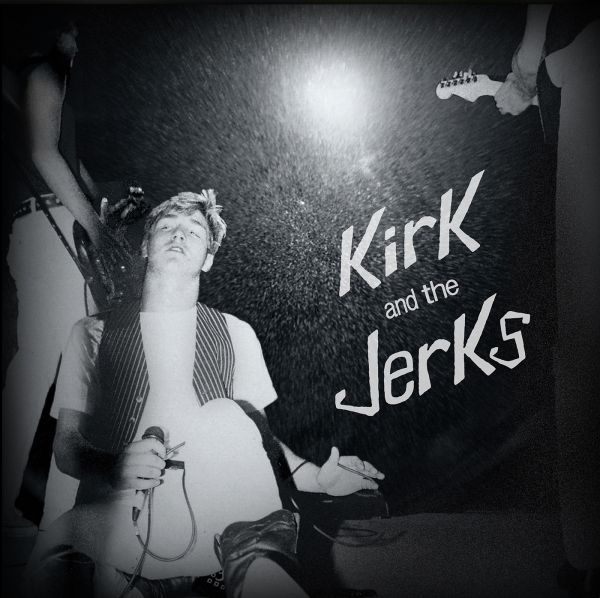 So stoked for this record, i have been looking for a Kirk and the Jerks discography or even a crappy download of all their songs for years. I fell in love with these guys like many other people from the H-Street videos. There has been some songs on youtube and a bootleg record, but we have all 37 original songs from the band remastered. The vinyl has 12 songs hand picked by the band that comes in a single pocket gatefold jacket. The record also comes with a 2xcd/digital download of all 37 songs and a bumper sticker just like the original the band had back in the day and a double sided insert. The Test Press come with just the record in a different sleeve and digital download. test press comes with just LP and digital download no cd/sticker.

It’s no surprise that these words would eventually end up getting written. The Kirk & the Jerks story has been a mystery to most for 30 plus years and is finally getting told, and heard. As a band whose music has helped shape the lives of many a youth over the years, continued interest in the Jerks proves that their music has stood the test of time.

Kirk Rice and Dave Benner of Lancaster PA’s Nobody’s Fools formed the Jerks in 1986. Dave’s friend Mark Diener joined up as drummer and his younger brother Eric Benner, only 13, took on the bass. In those early years the group created a raw, passionate and uncompromising set of original songs like “Hang on to the Dream” and “Who Cares if Tomorrow Comes” that rang throughout the neighborhood from the garage at Ma and Pa Benner’s house. Apparently, the neighbors did not have the same dream because the police made many visits due to noise complaints.

The Jerks performed with not much more than two-finger power chords, but when Kirk’s lyrics and delivery were combined with the explosive energy in the music, the results were truly special. The recordings were crude, made on rented 4-track recorders with cheap microphones, but captured an incredible degree of youthful emotion and intensity.

Steve Boltz joined the group in 1987 to add a 2nd guitar to the mix, and the musicianship and creativity of the group began to grow. They started to learn their instruments and began experimenting more with the songwriting. With tunes like “Soldiers of the Last Generation” and “Backstreet Angel,” the average song length almost doubled. The band sold demo tapes at local record stores in town for a few dollars each. This lineup played the Lancaster club scene at places like the Chameleon Club and was well received.

In 1988, around the time most of the guys were graduating high school, Boltz and Diener left to pursue other interests and the Jerks joined forces with some members of The Dilemmas, taking on Curt “the Kid” Laudenberger as drummer and Tim Hackash as guitarist. This band incarnation lasted only a short time and recorded a couple of songs, “Lightning Strikes” and “Where Angels Fear to Tread.” The Hackash family was courteous enough to host these Jerks in their garage for their duration.

After a short hiatus, the Jerks reformed and added some new faces. Keith Schneider came in on guitar and Mike Rosivack took over the drums. This was an interesting time of transition. The band was growing up; free garage space turned into a rented rehearsal studio; old recorders were put aside for paid recording professionals. While punk rock remained at the forefront, some new influences began to emerge from the likes of Faster Pussycat, Hanoi Rocks, L.A. Guns and others. Some of this new sound can be heard in songs like “Gun and a Tear” and “September Rain.”

Once again members split and went their separate ways, but the break lasted several years this time. The Benner brothers united with former Jerk drummer Curt Laudenberger to form Mystery City. When this band fizzled out, what better way to re-shake the souls then to revive Kirk & the Jerks? Kirk, Eric, Curt and the newest Jerk Greg Cathey, who replaced Eric Garvin on bass, took another stab at it in 1994. After recording a 7-song demo in 1995, with “Can't Wait for the Breakdown” and “Real Life” leading the way, brother Dave was back in the fold joining Eric on guitars. The group got their groove back, started playing shows in Lancaster, and wrote a handful of new songs that never made it to tape. Alas, longevity had once again eluded the boys, and by the end of 1996 this lineup too called it quits. Before long Kirk and Eric were back in the studio with new comrades Casey Wolfe and Jim Patton. However, the songs they recorded were lost. Yes lost. Long story for another time.

While at a video store around the year 2000, Kirk and Curt bumped into old bandmate Tim Hackash. After some reminiscing, they called on another old Jerk, Greg Cathey, who helped them re-record a few of the band's early songs in Curt's attic. While most of the songs remain unfinished, a track called “One of the Crowd” made it out alive. And that was that.

The band owes much of its success to pro skateboarders Steve and Art Godoy, who were also from Lancaster Pa. They were fundamental in getting songs into the hands of the creators of the H-Street skateboard videos who used them in a couple of their soundtracks, such as the all-time classic “Hokus Pokus.” Without the internet or the support of a record label, the band wasn’t aware of its popularity worldwide until years later when sites like Myspace, YouTube and Facebook came online. All of the band members are appreciative of the wonderful support received over the years. They have a great sense of pride from knowing that they have made a positive impact on the lives of many.

The curtain may have closed on Kirk & the Jerks, but their vault has opened containing the complete catalog of music for their fans to explore, and for a new generation to discover. Keep the energy and anthems alive! Hang on to the Dream!